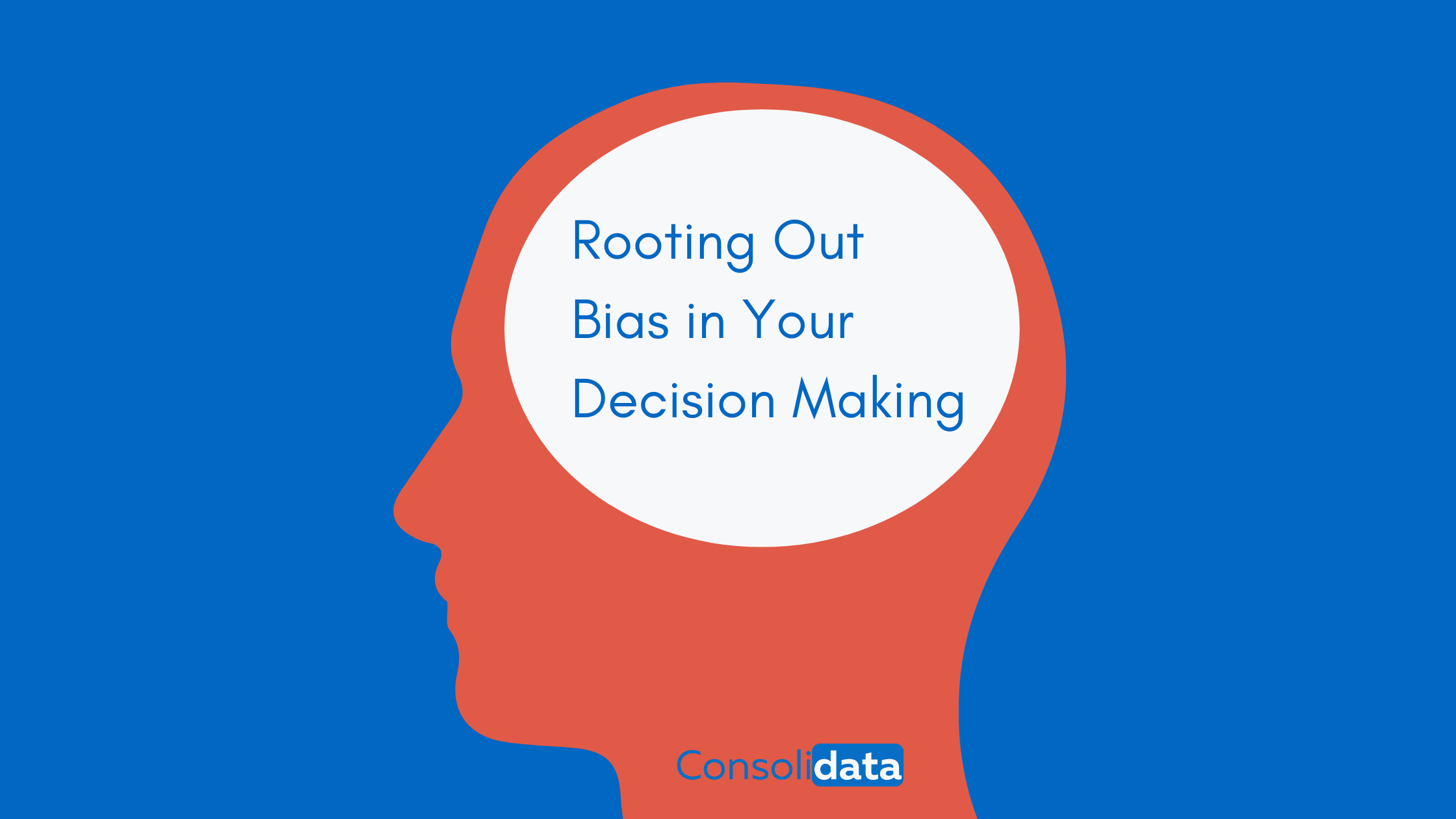 Rooting Out Bias in Your Decision Making

Making decisions is hard. It doesn’t matter if the decision is what you’re going to eat for dinner that night or how you’re going to spend your marketing dollars, the truth is we have to use what little energy we have to make decisions that matter. In today’s competitive world, staying up to speed and in front of your competitors is what can make or break a business. So, it’s imperative that CEO’s and team leaders alike make decisions that matter, and make them fast.

The flip side to that is we know that good things take time. The truth is, when rushing to make decisions we’re more prone to cognitive biases which hamper our ability to arrive at reasonable conclusions. So how can we ensure that the decisions we make stay untouched by our human tendency to be biased and make errors? It starts from the top. A decision is made by 1 person, a smart decision is often made by many. Making smart decisions often requires that you gather input and different perspectives from your team in order to find a solution, ensuring that everyone involved had a say and was heard.

Here are 5 Biases that are commonly involved in the decision-making process and how you can overcome them.

The Availability Heuristic or Availability Bias is essentially a mental shortcut that relies on immediate examples that come to a given person’s mind when evaluating a specific topic or decision. It operates on the notion that if something can be easily remembered it must be important, or at least more important than an alternate solution which is not easily remembered. Under this principle, people tend to base most of their decisions off of recent information, making their judgements biased towards the latest news or what they deem to be the most important.

When prioritizing one decision over another, managers often make the mistake of preferring readily available, yet highly unimportant issues over high priority issues that may not be within arms reach. Goku Rajaram, who currently serves as on the Executive team at DoorDash and has previously led several projects for Google and Facebook, has stated that one way to combat such biases is to employ a decision making framework that allows you to separate the most important issues from the mundane.

By running your questions through the framework it allows you to uncover the critical issues that will help make or break your business and makes it easier to focus on long term gains rather than short term and immediate solutions.

Confirmation bias is the difference between what we WANT to hear versus what we NEED to hear. As imperfect humans we have the tendency to either surround ourselves with “Yes-Men” or constantly cave in to the natural inclination of listening or considering information that aligns only with our beliefs or interests.

In order to overcome this bias, the decision-maker needs to do their best to introduce a set of alternative solutions to every problem, rid of any bias. Every new solution needs to be realistic, cover the entire problem scope and have a valid reason as to why it would be a viable option for the team.

The legend goes that when frightened, Ostriches will instinctively bury their heads in the ground in the hopes that trouble will pass them by. The Ostrich Effect bias refers to us wanting to hide our heads when encountering uncomfortable or difficult situations. For example, the Ostrich Effect could cause someone to avoid looking at their bills in fear of how far behind they are on their monthly payments.

The Ostrich Effect can rear its ugly head in business many times, often following a pattern that seems more common as time goes on:

If we let these biases, such as the Ostrich Effect, take place in our workplace it can cause our team members to lose focus on the important issues and turn down potentially brilliant ideas.

One of the best ways to avoid this bias is by keeping an open mind when entering into any group discussions and to try and not feel offended when someone opposes one of our ideas or has a different opinion on a subject.

Survivorship bias is a type of selective bias in which people focus on the many successes a business or person has enjoyed without also looking at the failures. An example of this would be how someone could say “Mark Zuckerberg, Bill Gates and Steve Jobs all dropped out of college and became millionaires, so will I”. The truth is many times these “winners” may not know exactly why they’re as successful as they are. A lot of times timing or pure coincidence could’ve played more of a part in their success than most are willing to admit.

When it comes to decision making, it can be easy to overvalue the successes without paying attention to the similar rate of failures that employed a similar strategy. Simply put, just because it worked for one business or person, it doesn’t mean it will work the same for another. When it comes to employing a new strategy, do your due diligence in examining why that strategy has worked in the past and how it can also fail.

Being wrong is hard to admit, even for the best of us. Which is why Choice-Supportive Bias is one of the most common biases in decision making. Also described as post purchase rationalization, it’s the tendency we have to distort memories in order to make choices we made in the past seem like the best choices we could’ve made at the time. For example, if someone chooses to buy an Android over an iPhone, they are most likely to forgo the downfalls or negative attributes of an Android while also amplifying or adding new faults to the iPhone.

A study done by the University of Iowa found that most people are unlikely to change their mind after they’ve come to a conclusion. Despite new information showing that their train of thought is wrong or even if clinging to their belief can cost real money.

Which is why it’s critically important to add new perspectives to the table when it comes to decision making, taking into account all perspectives and coming to a solution.

Overcoming these biases starts with understanding that the problem exists and tackling it as a team with a proper procedure in place. If new alternatives are presented, weighing out the pro’s and con’s and getting into the numbers can seem ambiguous but it will prove to be well worth it in the end.